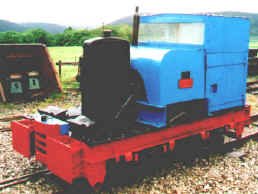 Elvan presently resides at the Leadhills & Wanlockhead Railway in South Lanarkshire.
Originally designed to a tropical design to 800mm gauge, she was finally built to 2' 11" gauge for the London Brick Co.
Elvan was re-gauged to 2' in 1970 and was purchased to operate on Leadhills metals in March 1986 where she has been since.
The present owner purchased Elvan in July 2003 and is presently undergoing some restoration work to return her to as best known original condition although she will remain as a 2’ gauge loco.